Jul 14 Posted by Thorsten Mötje in Intranet and its advantages Flexibility, pragmatism, willingness to change - rarely have these qualities been in such demand as in the past few months. As if out of the blue, a virus forced us to throw established conventions overboard overnight and enter "new territory". Without being able to draw on empirical values from comparable situations, ways had to be found to avoid slowing down economic value creation too much. At the same time, it was necessary to ensure that contact restrictions were in place to contain the pandemic. In retrospect, this seems to have succeeded in many respects better than was feared at times.

Increasing digitization in recent years has improved the opportunities for working from home. In more and more professions, employees can perform all or part of their tasks from the home office. Travel time to and from the place of work can thus be saved and flexibility gained, for example with regard to the compatibility of family and career. In practice, however, only a minority have taken advantage of this option to date: of those in employment between the ages of 20 and 64, only eleven percent usually or occasionally worked "remotely" in 2017. This puts Germany in the lower midfield in the EU, while the home office rate in other countries such as the Netherlands, Luxembourg and Sweden was already over 30 percent before Corona.

In a study, Hays investigated whether the experiences during the pandemic influenced the very pronounced presence culture in Germany. In the first step, we measured how often the option of a home office is advertised in public job advertisements. For this purpose, we counted advertisements published since 2017 on job boards, on company websites and in print media that contain the term home office or corresponding designations.

The content analysis of the job advertisements shows that home office offers have steadily increased over the past few years: In the entire year 2017, this home office option existed in only 30,000 jobs offered. Converted to the total market, this corresponds to not even two percent of the jobs. One year later, slightly more companies were already relying on remote work. Nonetheless, the share of remote work in relation to all jobs remained low at just under three percent. There was a slightly stronger increase in 2019, with nearly one in 20 job ads including a reference to the home office option - three times as many as in 2017. In the spring of 2020, due to the outbreak of the pandemic, a large proportion of the workforce found themselves working from home overnight in order to contain the further spread of the novel Corona virus. A look at the 2020 job advertisements shows that a rethink has already begun in many companies: More flexible and location-independent working is now being advertised more frequently in order to score points as an attractive employer. More than nine percent - or in absolute figures: around 152,000 - of job offers in 2020 included the option of a home office. Looking at the individual quarters since the beginning of 2020, a steady increase emerges, which also continued in the first quarter of 2021. After the first infections became known at the beginning of 2020, contact restrictions and the first major lockdown followed in March. Just under a third of German employees were working outside the traditional office environment at the time. 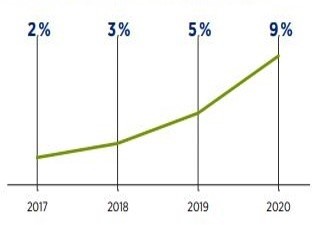 A slight increase in home office offers was also seen in job advertisements: although companies advertised significantly fewer positions due to the economic uncertainty, the proportion of home office mentions rose by almost two percentage points. As the infection situation eased during the summer months, many companies returned to regular office operations. More jobs were advertised again overall, and at the same time, the advertisements more frequently referred to the home office option. With the second and third waves of the corona pandemic, contact restrictions were also tightened again, leading to a renewed decline in face-to-face office operations. The home office rate increased again, but not as much as during the first lockdown. However, the increase in job postings in which companies advertised remote work was very significant: In the first quarter of 2021, around one in seven advertisements included the offer of a home office. 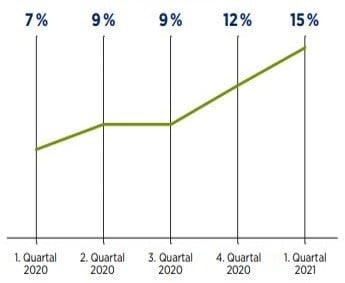 With the right tools, the cultural shift toward more home offices is a success. SION, the Social Intra-organizational Network, makes the exchange between people and their interaction as simple and individual as possible - overcoming physical distance and creating cohesion. SION is the one central connection between employees and the company and their colleagues.